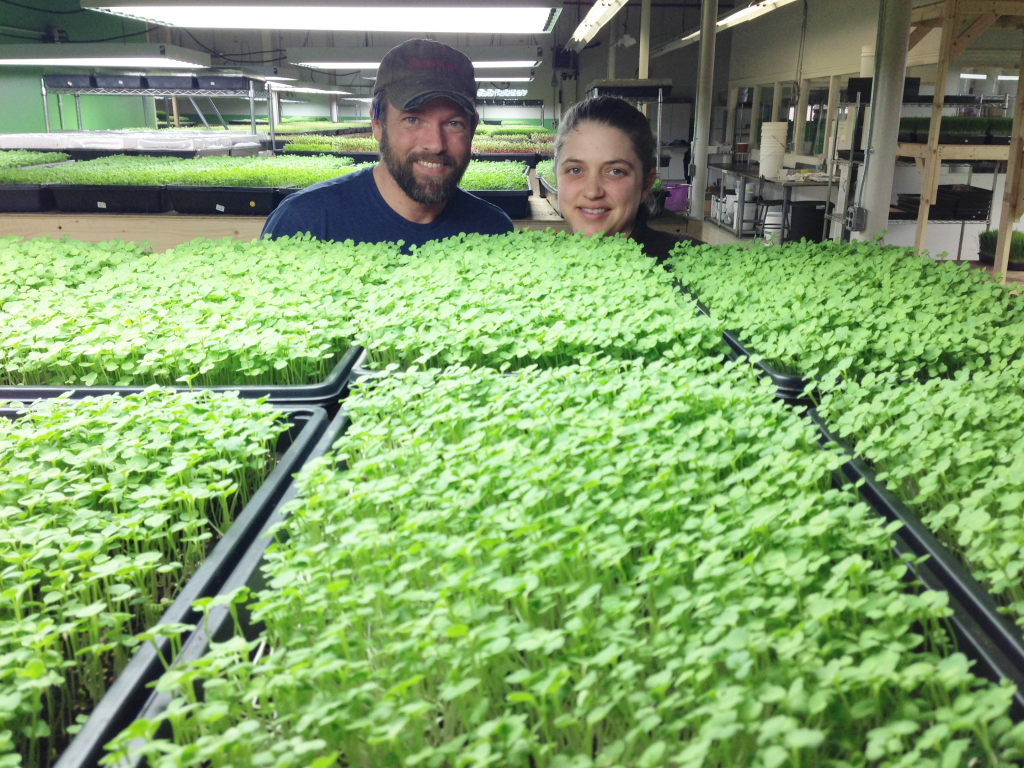 BY JASON WENTWORTH
When one hears about a local farm, it’s natural to conjure up images of wide open skies over rows and rows of corn, cows grazing in verdant plains, a tractor in the distance…you know, typical bucolic New England. So you’d be forgiven if, on a drive through Attleboro, you zoomed right past 2 Friends Farm and didn’t even realize it. I sure did! Set in a former factory in an industrial park on the outskirts of a blue-collar Southeastern Massachusetts city, 2 Friends’ exterior appearances can be deceiving…but walk up a flight of stairs, open the door, and you find yourself surrounded by light, rows and rows of delicate green vegetables and more than a little magic.

The two friends in 2 Friends Farm, Ashley Driscoll and John Irving, are the magicians that make it all possible, and their feats of wonder were borne from a desire most of us share: to have healthier foods. Ashley got her start by growing vegetables (predominantly microgreens) indoors in her own home. Like many of us, she wanted to know where her food came from. Quickly, she realized that others were looking for the same thing and that the demand for fresh, organic microgreens far outstripped the supply. Ashley and John began commercially operating about 3 years ago in a similar facility in Attleboro and moved to their current West Street location this past January. “We’ve tripled our production, and had just outgrown our previous location,” Driscoll said, pointing to John as he worked on preparing another large room used to store items to be ready to grow.

You may be asking “what’s a microgreen and why are they in such demand?” Microgreens are tiny vegetable greens that come in a wide variety, used for both their visual appeal and flavor as a component of a larger dishes like salads, sandwiches or soups, or coupled with other greens, or just eaten on their own. They’re usually associated with upscale markets and fine dining. Taste varies greatly depending upon varieties, with daikon radish, pak choi, arugula and mustard microgreens predictably tasting much like their more mature plant cousins. In addition to their beautiful and delicate nature and distinctive flavors, microgreens are packed with nutrients. Based on studies published in 2014 by the USDA Agricultural Research Service of 24 varieties of microgreens, levels of vitamins were about five times greater than their mature plant counterparts. More studies are forthcoming but it’s clear that microgreens are pretty, tasty and good for you, and it’s no surprise they are flying out of 2 Friends Farm.

“We’re going through 1400 trays a week now,” John told me last week. That number jumped from the last time I visited several weeks earlier, and is an indication of the microgreens’ growing popularity, not to mention 2 Friends marketing skill and general hard work. They have about 16 employees working varying shifts, and clearly labor is the greatest expense. “It can take up to a half hour to harvest one tray,” John said. “Cutting the greens from the trays has to be done right, because no one wants to eat soil.” Ashley added, “we may be in an old factory but there’s no automation.” Staff meticulously plant seeds, water and, after an average of 10-14 days under grow lights, harvest greens by hand and the high quality of the product speaks to that attention to detail.

Regarding soil, 2 Friends Farm is a certified organic operation, using certified soil and seed. An additional selling point to conscientious customers is that their packaging is, as John told me, “not just recyclable but also 100% recycled”. They produce 23 different varieties, mixed and salad blends, and are in a couple dozen restaurants and about 40 markets from Connecticut to Massachusetts to New Hampshire, working with produce distributor Katsiroubas. Containers of greens aren’t hanging about for long, and people in agriculture are taking notice of 2 Friends’ success. Last week, a team of staff from the Massachusetts Department of Agricultural Resources led by Commissioner John Lebeaux attended a ceremony at the farm to present John and Ashley with their Commonwealth Quality program (CQP) certificate and the CQP Innovation Award. Additionally, State Senator Richard Ross presented citations on behalf of the State Senate, House of Representatives and the City of Attleboro in recognition of their achievement.

John and Ashley take pride in this recognition but more so in the quality of their product and, in addition to running a tight ship and a growing, organic business, they are keenly aware that they’ve really grown something out of nothing. “I grew up running around in a factory like this as a child (where her parents used to work), and it’s exciting to breathe life into a place like this that was dormant for so long,” Attleboro native Ashley said. John also gestured down the hallway where Homestead Cider is located, pointing to the growing, young businesses in Attleboro. “You have challenges no matter where you are. You have to work with the space you have and be creative, but it’s been great to be in Attleboro. We’ve felt a lot of support, and this location’s central proximity to our distribution network has been fantastic,” he added.

With the microgreen becoming less exotic and more commonplace for consumers, John and Ashley see that demand driving more production, and possibly expansion in the future. As the demand for locally-grown vegetables grows, indoor growing will not supplant but continue to develop to supplement what some consider “traditional” methods of agriculture. At its core, what 2 Friends Farm does is absolutely in line with what farming is all about: using the best possible soil and seed, care in the growing process, and carefully cultivating and responsibly packaging the final product. So, next time you drive past an out-of-service factory, you may be driving by a future farm…and that’s not a bad thing.

Today is a very special Member Monday - it's also