BY JASON WENTWORTH
Farmers are an indispensible part of our civilization. Despite the fact that all too many in this day and age are unaware of how their own food systems work, everyone becomes very aware when the price of things like oranges, tomatoes, eggs and milk go up because of production issues. We become more acutely aware of those things when we are deprived of them. Our farmers and growers make sure we can feed our bodies. The folks at Colchester Neighborhood Farm in Plympton are doing that, and then some. They’re working to provide independence and purpose as well.

Phil Nichols, who manages Colchester, has taken a circuitous route to becoming a farmer, but he wouldn’t have it any other way. Spending over two decades in fine wine retail and restoration of antique furniture and homes, Phil developed a pretty wide-ranging skill set and did pretty well for himself. In 2012, feeling the need to do something greater, he began working with New England Village, a non-profit founded in 1972 which seeks “to empower adults with intellectual and developmental disabilities to realize their potential and pursue their dreams through innovative programs and community living.” Several years before, New England Village assumed operation of the 8-acre farm for the purposes of using the land and the farming experience to provide opportunities for their program participants to develop important skills and attain a greater independence. 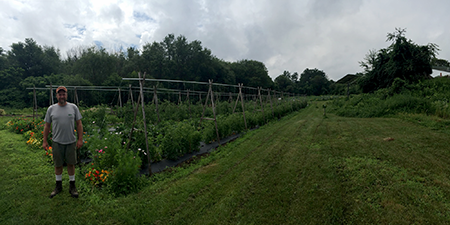 Since then, Colchester has continued to expand its operations as a certified organic farm and this year began what Phil refers to as the “Free Choice” CSA, a sort of hybridized retail/CSA which allows members to use a pre-loaded debit card to pick up any day from Wednesday to Saturday (2pm-5pm) and also allows members to have a greater selection. “We’ve expanded our market basket of what is offered, and members love the increased options. They get to decide what they want and when they want it,” Nichols said. Colchester has about 75 CSA members, half of which are trying out the “Free Choice” system, and Nichols believes that that number will continue to grow in popularity. “We don’t have to plant based on ‘pre-sells’, so we can plant a little extra and meet the demand head on,” he added. In addition to traditional and “Free Choice” CSAs, the farm stand also retails to non-member customers, and gift cards are available. A wide variety of vegetables are available throughout the season, including favorites like lettuce, broccoli, tomatoes, potatoes, squash and many more. Any produce harvested during the week not sold during the pick-up days is donated to local food pantries. Additionally, Colchester offers an egg share, flower shares, and will also have a winter CSA as well. 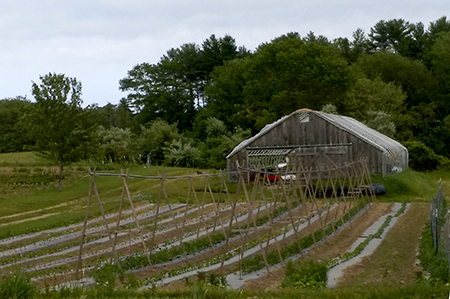 Entering his fourth full season, Phil’s “jack-of-all-trades” résumé continues to serve him well and, while he relishes his opportunity to be a farmer, he never loses sight of what Colchester’s priority is. Every day, a regular group of five adults comes to work at Colchester Neighborhood Farm as part of New England Village’s “Community-Based Day Services” program. Other participants come on other days as well. Under Nichols’ guidance, participants help through a variety of activities, including cleaning and washing vegetables, helping to set up the retail area, weeding, planting and feeding and watering the over 95 hens which produce about 60 eggs a day. “Our participants have a variety of skill sets, and it’s up to us to provide incentives and motivation,” Nichols said.  Participants also receive shares as part of their food budget and shares are also distributed to New England Village’s adult residences. 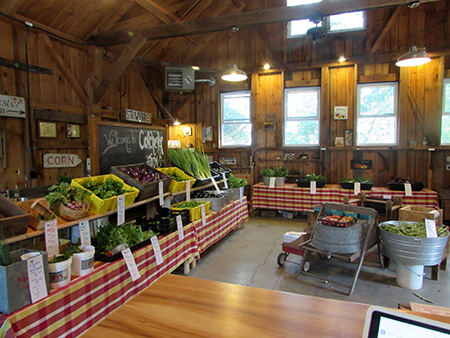 Clearly, the incentives work, as many participants have been coming back for years. Because of the population New England Village serves, the program has to undergo rigorous scrutiny and comply fully with regulations. Each participant has an Individual Service Plan (ISP) to help the program address the specific needs of the participant, and these ISPs help New England Village develop the integrated processes it employs. The goal is to gain that broader independence. “In the broader job market, programs you’ll see will generally serve the most high-functioning adults. There are so many adults in the system that don’t fit into that category, and they deserve to feel useful and have the opportunity to be useful, learn, and grow,” Nichols said. Managing an organic farm is challenging on its own. Add the human services component and the challenge increases. Phil Nichols wouldn’t have it any other way. “There’s a constant opportunity to train and teach,” he said with a smile. Food nourishes our bodies and, season after season, the fields need to be cultivated and harvested but, for the folks down at Colchester Neighborhood Farm, an equally-important crop is harvested daily: independence.

We are thrilled to announce our first-ever virtual