When was the last time you ate an oyster? Whether you’ve never tried one or you jump at every opportunity for a taste, this unique shellfish plays an important role in the food system in Southeastern Massachusetts and beyond.

On a cloudy day in Duxbury last month, Massachusetts Commissioner of Agriculture John Lebeaux joined SEMAP to visit 2 Rock Oyster Farm in Duxbury Harbor. Lebeaux, along with other staff at the Massachusetts Department of Agricultural Resources (MDAR), tours farms across Southeastern Massachusetts every year to talk with local farmers and incorporate their voices into the state’s food and agriculture policy.

Gregg Morris, owner of 2 Rock Oyster Farm, greeted SEMAP and MDAR staff at his dock. He’s been working in fisheries and marine science for over thirty years, spending the last 19 of those as an oyster farmer and business owner. Gregg’s enthusiasm for his work is infectious, and he picked the right harbor to set up shop. The Duxbury Bay Maritime School, steps away from his dock, holds educational and recreational programming for kids, teens, and adults seeking to connect with the local marine environment. Sharing a space with this non-profit school helps Gregg connect with the Duxbury community and a future generation of fishers, marine educators, and oyster farmers.

His ties to the community run deep. Twenty-nine oyster farmers work out of the Bay with a spirit of cooperation and camaraderie, united by their love for aquaculture. Standing on his dock, Gregg pointed out the other farmers’ operations and waved to anyone cruising by. He shares this harbor with larger farms, but has no desire to scale up beyond the intimate business model he has been operating since 2002.

On his dock, Gregg showed us the baby oyster “seeds” that begin each growing and harvesting cycle. The oysters spend the first part of their lives contained in mesh boxes just below the dock. The water rushes quickly through these boxes, aerating the oysters and offering them nutrients so they can grow quickly. Gregg gets seed from several different hatcheries, enhancing his farm’s genetic diversity, which helps to prevent disease and enhances the oysters’ unique taste.

“I absolutely love it,” he said, scooping out a handful of small oyster seeds. “I wake up in the morning without an alarm because I’m so excited to do my job.”

After the young oysters grow at the dock for several months, Gregg and his crew bring them out further into Duxbury Harbor to complete their development in open water. He boated us out there for a chat and a tasting. Once the oysters are big enough, they are removed from their mesh containers and broadcasted on the seafloor of the farm. Unlike many oyster farmers, Gregg’s oysters aren’t grown in bags for their whole lives. This means he inevitably loses some of them to extreme weather, currents, and predators, but it allows the oysters to grow in a similar way to the wild, giving them a tougher shell and better flavor, according to Gregg.

At low tide, Gregg and his crew boat out to the float at their leased site a few hundred feet from shore, throw on their waders, and hop into the shallow water to rake the sea floor for mature oysters. Come high tide, you’ll find them taking care of their boats or gear, or on their float, processing and preparing the oysters for the marketplace.

“The community loves it – everyone from the kids that work for me to the local restaurants,” he said. Gregg’s young crew has been working with him for four years, facing many challenges along the way. Aside from ordinary weather challenges associated with being on the water for ten months of the year, climate change pressures increase the frequency of extreme storms, raise ocean temperatures, and impact oyster shell strength.

If that’s not enough to contend with, oyster farmers like Gregg have been hit hard by the pandemic. COVID-19 has upended domestic and international outlets for oysters, including large-scale events and restaurants. In 2020, shellfish farmers lost up to 80% of their regular revenue – just a year prior to the pandemic, Massachusetts oyster farmers brought in over $30 million. Many couldn’t afford to pay their crew or their bills, and had to shutter their businesses for months. Thankfully, with help from programs like the federal Paycheck Protection Program, Gregg and many other local oyster farmers are back this year and navigating a strong recovery. State programs like the Food Security Infrastructure Grant aim to support farmers like Gregg through volatile times and build for a successful, stable future.

Gregg stays motivated and passionate about the business, despite the challenges. He only stopped smiling long enough to eat a few oysters! 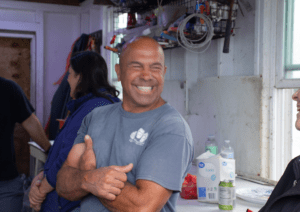 “If I won the lottery tomorrow, I’d still be an oyster farmer,” he said. “We’d definitely get some better gear, but I’d still be out there every day.”

If you are interested in learning more about 2 Rock Oysters or the oyster farming industry, please email shickey@semaponline.org to be connected with Gregg!