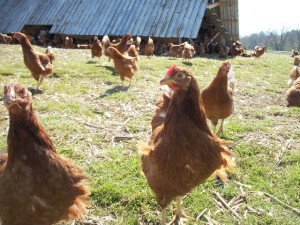 At Copicut Farms, it’s neither the chicken nor the egg that came first, but the willingness and dedication of one New England family. After years of work in science and education, Elizabeth and Vince Frary decided to pursue their dream of starting a farm. Now in their third season, Copicut Farms raises chickens (for eggs and meat), Cornish game hens and turkeys – about 3,000 birds in all on 80 acres of mixed woodland and pasture. Copicut Farms is a family owned operation that uses no hormones or antibiotics in any of their feeds, and Copicut birds enjoy a free range lifestyle, feeding on healthy pasture and fertilizing the soils along the way.

Although both Elizabeth and Vince grew up on and around farms (Elizabeth is a fourth generation family farmer!), neither of them had initially chosen farming as a career. Vince was a wildlife biologist for the state of Arizona and Elizabeth had earned her Masters in Elementary Education. Their early years of farming had instilled in them the values of hard work, dedication and a love of the outdoors. Starting a farm together became an opportunity for them to create that experience for their young son, Emmett, who gets to spend every day on the farm and absolutely loves it. END_OF_DOCUMENT_TOKEN_TO_BE_REPLACED 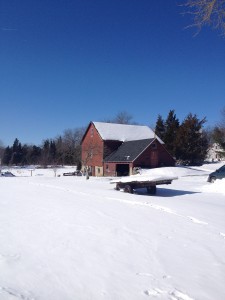 BY NICKI ANDERSON
A smooth snowy blanket covers the fields at Heart Beets Farm, fresh for Opal, the farm’s two year old Australian Cattle Dog, to dodge and dart through frantically in all her ebullience. Inside the greenhouse, kale, spinach and lettuce enjoy their own blankets of row cover, keeping them warm enough to survive the freezing temperatures. With the sun shining on a clear, crisp day, we sit with Head Farmer Steve Murray, formerly of Kettle Pond Farm, to learn more about his story and his new farm.

Although this may be the first year of operation for Heart Beets Farm, it’s Steve Murray’s eighth year farming in the South Coast region of Massachusetts, and his sixth year growing food at 181 Bay View Avenue in Berkley, MA. END_OF_DOCUMENT_TOKEN_TO_BE_REPLACED

Thank you to our donors!

Many thanks to our generous donors who contributed a total of $25,990 to SEMAP’s Annual Appeal! These generous gifts will greatly help us to continue our education and awareness in 2014 through our Annual Ag & Food Conference (March 22nd), the Twilight Grower Education Series, and the Buy Fresh Buy Local Campaign.  We will also pilot the “Farm Advancement Program,” for farmers to apply for small grants for technical assistance, equipment, internships, website development, social media consulting, etc. Thank you again for all of your support and here’s to a successful 2014!

FALL RIVER — Gregory Watson had just been appointed the state’s commissioner of the Department of Agricultural Resources when he attended a conference of his peers from around the country.

He was seated next to the head of agriculture for South Carolina, who smiled when he heard Watson had to watch over farms in Massachusetts — flinty, rocky, hilly Massachusetts.

“He said to me that, if this country had been settled from west to east, all of Massachusetts would be a national park,” Watson said. “He asked me how we did any farming here.

“I told him it was Yankee ingenuity,” Watson said.